I think we can all safely agree that Lauren at American Duchess rocks. I also think she doesn't sleep. She has just released a new pair of glorious historical shoes! Well not just one pair but three! 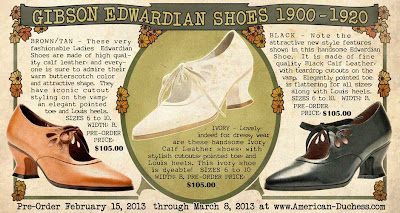 They are Edwardian shoes in three colors as seen above. Think of all the possibilities! Titanic, Downton Abbey, and numerous others too.

I love her shoes and since grad students do not have a budget that allows for pretty shoes like these, I'm gonna have to keep drooling about them. Oh if only......

Posted by Merlina at 9:46 AM No comments:

A Damsel in Distress or a Distressing Damsel?

It's clear, the list is off the table. I started with a nice, defined, short list of what I intended to make this year.


The 1790s gown wasn't originally on the list, then I fell in love with theses shoes: 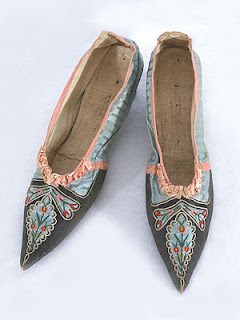 They're from the 1790s and the pic is from Vintage Textiles. I originally saw them on American Duchess ages ago and saved the pic, then found it when organizing files. One cannot make shoes and not have a dress to go with them!

So despite the 1790s not being my favorite time, that joined the list. Then we decided to have some fun and run around at the NY Renaissance Faire as more than just the secret project. Lover and I like having characters to be. And since part of the Secret project also works as Hero Attire (Clue #3). We decided to also go as the Hero/Damsel. Which was more to design! But really fun to play, I mean who doesn't want to be rescued and swept off her feet every once and a while?

After look at tons of pics and trying to think of something, I came up with this: 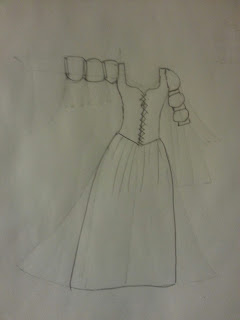 I love the sleeves but I wanted to make the dress blue and that would look too much like Belle's out of Once Upon a Time:

Both pics are from IMDB (http://www.imdb.com/character/ch0305780/mediaindex)

Don't get me wrong, I like Belle as a character, sometimes, but I really don't want people to think that's who I'm dressed up as. And Once Upon a Time is a really good show, but I want this to be me, one of my characters. So back to the drawing board.

So I thought I need to be in a dress that could be a "working dress" for a noblewoman in the Elizabethan Times, because A) for some reason upper class women are the majority of the ones who run around damselling. and B) I wanted to be even a little historical.

Also because I fell in love with pretty purple linen off Renaissance Fabrics. Linen would be nice and cool for the hot summer. So I got bored and doodled, and since I can't find the sketch, I have a pic of the idea that I did off the Tudors Scene Maker off Doll Divine. It's a really cool way to get ideas and lose track of massive amounts of time. 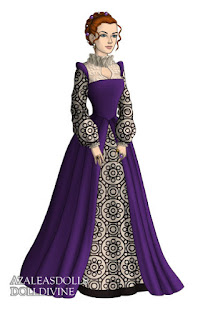 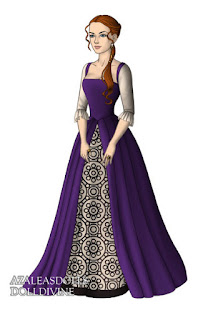 The left image shows my Elizabethan character, Isabel, dressed for court before the Queen, and the right shows her as a damsel in a working dress which is really the same as court dress just with unlaced sleeves, sleeve rolls, no ruffs, partlet or fancy hair. The idea is to be on the summer progress with the Queen, ie like a RenFaire.

My plan is to make the purple out of purple linen, the underskirt and sleeves out of damask or flocked fabric, and then have all the pieces.

So now there are sixes things on the list instead of four. And I've already made some stuff I didn't even bother to list. Perhaps I need to learn to plan better. Or maybe it's just a costumer thing.

Posted by Merlina at 1:00 PM No comments:

Email ThisBlogThis!Share to TwitterShare to FacebookShare to Pinterest
Labels: Damsel in distress, gown, ideas, Isabel Lloyd, knights, Once Upon a Time, the Tudors

A brief post with more clues for the Super Secret Project. Hehe. It is well underway. In addition to the shirt, the pants are almost finished. Lover is doing quite well with his first sewing project. (I delegated pants because I still have far too many projects in progress) There may or may not be pictures, I can't decide, because they could give away the project. I don't think they will though.

For this project I get to work with buttons, such a rare thing. So here are some of the potential buttons: 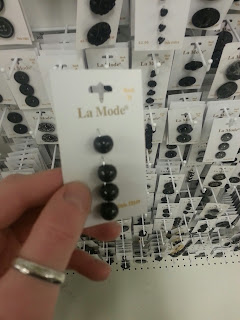 Possible of for the shirt 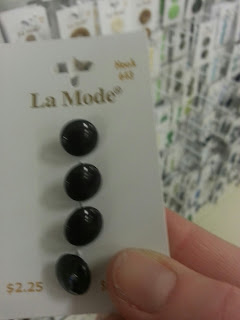 Another possibility for the shirt. 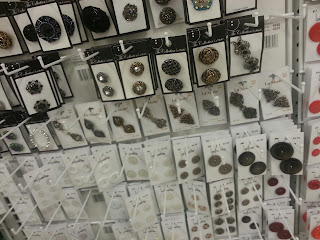 Clasps. Right in the center there 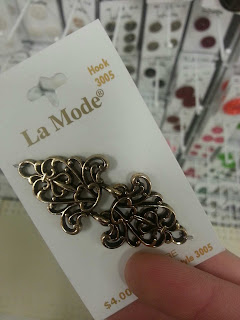 These look the closest to what is needed. I will tell you I need more than one 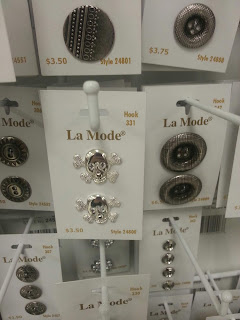 Posted by Merlina at 2:30 PM No comments:

It was tradition for ages for the lady to grant her knight a token of her affection. This was part of the rules of Courtly Love. Gradually it be came less formal and the gifts we give today to one's significant others are at least partially influenced by this. Originally, I think, it was a sleeve or glove then a ribbon when the knight was to joust for the lady. You can see this in several episode of The Tudors. (Yes not historically accurate but still pretty fun).

Tokens of affection were often handmade items. Keep in mind, noblewomen had time to sit and do all the embroidery and sewing. (Unlike us who scrounge for sewing time - well I do). Sometimes it would be family crests then it became initials, intertwined.

Now, before I show you all the pretty pictures, it must be said, I loathe embroidery. I rarely if ever do any of it. Yes, I did make a Christmas table runner, but that took me two years. So the fact I did this in about four days total, spread over a week, is a pretty big deal for me.

And now for the pictures. 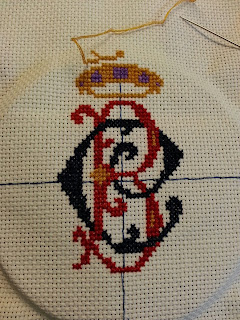 In progress, letters intertwined and the crown beginning 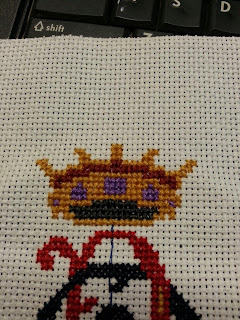 More of the crown 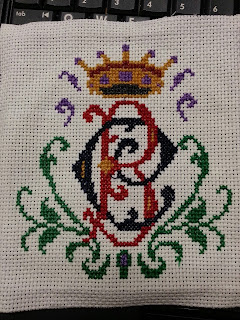 Finished piece, except for the hemming around the edges.
The colors are brighter in real life

I made it on a scrap of Aida cloth I found in the stash, and with DMC cotton embroidery thread. I found the pattern out of a book I found in the library. I don't remember the name but it was full of monograms. I blended a couple of the patterns together to get the image I liked. All the colors are symbolic and directly linked with Heraldry - a hobby and fascination of mine.

I'm quite happy with it. And it's likely the only embroidery I'll do for the next couples years. Although embroidery floss is quite useful for eyelets.....

And no, no you don't get to know who the initials are for. ;)
Merlina
Posted by Merlina at 2:00 PM No comments:

Email ThisBlogThis!Share to TwitterShare to FacebookShare to Pinterest
Labels: embroidery, Heraldry, knights, the Tudors, tokens of a lady

We interrupt your regular sewing news to bring you cute news overload! It seems cats and sewing going hand in hand. Personally I blame all the moving pieces and feline curiosity. My sewing world is no exception. I have three but only two are truly interested in sewing and only one when it amuses her - which for those of you who know, is typical feline behavior.

So allow me to introduce:
Mittens, our Queen. 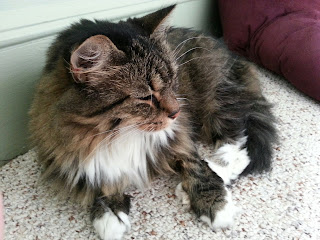 She is thirteen and a sweetheart, unless she doesn't want to be at any given moment. She likes sleeping on fresh from the dryer prewashed fabric and any fabric left laying around, especially fleece. She also likes to ensure the trim stays where it should, help lace stays and corsets, and most importantly, sample any snacks.

As we can see: 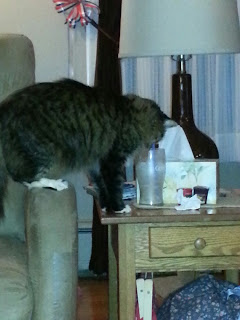 Next in the feline social order is Zoey. She is seven and does not help, simply observes, and fights Mittens for the warm fabrics 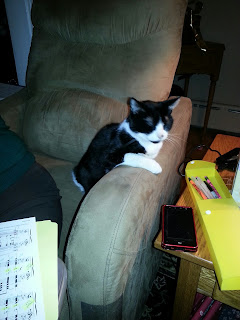 Finally we have Sylvester 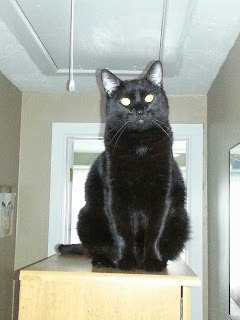 He is the most helpful. He keeps fabric from flying away when it's getting cut out, he kills all the invisible mice hiding in the wrinkles. He also captures run away spools of thread and bobbins. Sylvester is the Official Cat Who Sits Upon Things That Are Next to be Sewed, as well as Official Needle Watcher - he stares at the sewing needle to ensure it goes up and down at the same time. He learned the hard way not to touch. (No really wound, just hit on the head with part of the moving machine) 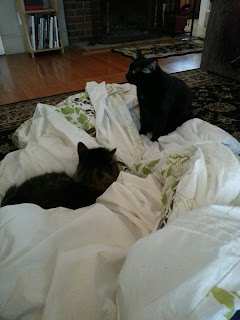 This is Sylvester and Mittens assisting with the pinning 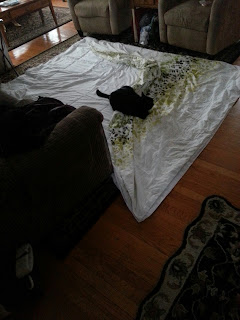 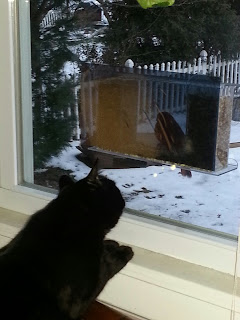 And this is the end of the interruption, back to your regular scheduled programming!

Plus if you want more fun kitty and doggy sewing assistance check out some of the posts on American Duchess, and The Dreamstress. They also make awesome costumes/historical clothing. So much so that it scares me sometimes. I know there are others with sewing pets, I just can't remember those off the list I follow so I'm sorry if I forgot!

Cheers!
Merlina
Posted by Merlina at 10:28 AM No comments:

Merlina
My name for all intensive purposes is Merlina. I am a partially self taught costumer who borders on reenactor at times and would if not for budget constrant. I am also a fledgling author. And if I told you what I do in the real world, you wouldn't believe me. This is me sharing my work; the good and the bad. I've read so many blogs I finally decided on my own. So enjoy. :)